Lev Khesin learnt from Professor Frank Badur at Universität der Künste Berlin, and after achieving the Meisterschüler title he became an emergent artist in Berlin. He produces pictures that are almost sculpture, gaining depth from the many layers of silicone that he applies. One of his work’s attractives is the contrast between the cold artificialness of the silicon and the warm humanity he applies to it with his hands.

He stayed for a month in July, 2009. He was very interested in Japan’s culture and he even made from bamboo the tools to hold a traditional somen nagashi event. His exhibition “Zeitwoerter” at IAF Shop was very well attended. 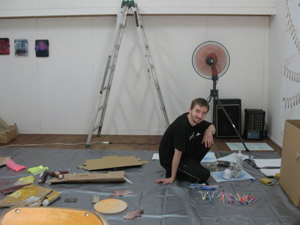