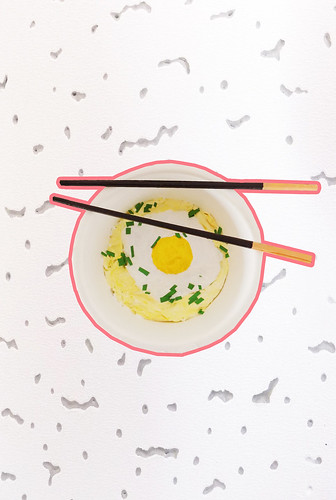 We are happy to announce Le “Kakkoii”, made in Japan, an exhibition by Andrée-Anne Mercier, as a result of her activity during her stay at Studio Kura.

Andrée-Anne Mercier is a multidisciplinary artist based in Montreal.
She completed her Bachelor of Arts in Visual and Mediatic Arts at Université du Québec à Montréal in 2015, her work has been shown in many places in Montreal.
Her practice explores the universe of popular culture and tends to question various aspect of society. The use of mass consumption is a way to question and criticize the subject.

During my residency at Studio Kura, I accumulated the images, photographies, objects that highlighting my presence and my observations in Japan. For example, I collected things related to food marketing, publicity, popular character, J-POP, etc. With all this amass of elements, I transform images and create sculptures and digital collages that referred to a coloured, absurd and pop universe. I’m playing with the mediocrity of the reality. This commonness that calls out to question me and that I position in an imaginary universe.

I use kitsch as aesthetic template and the ways of marketing popular culture as auto-promotion of my work. One of the basic notion of our time is to live in a hurry. In my work, there is this interest of abundance, rapid production and quick consumption. Playful, easy and a bit cynic, my work ask question on the life of the mass.

Andrée-Anne Mercier: Le “Kakkoii”, made in Japan
Date: February 20 (Saturday), 21 (Sunday), 11:00 to 19:00, free entrance
* We will hold an opening party on Saturday the 20th, starting at 15:00.
*There is another exhibition “legendary creatures and other things” by Miguel Blanco during the same exhibition period.