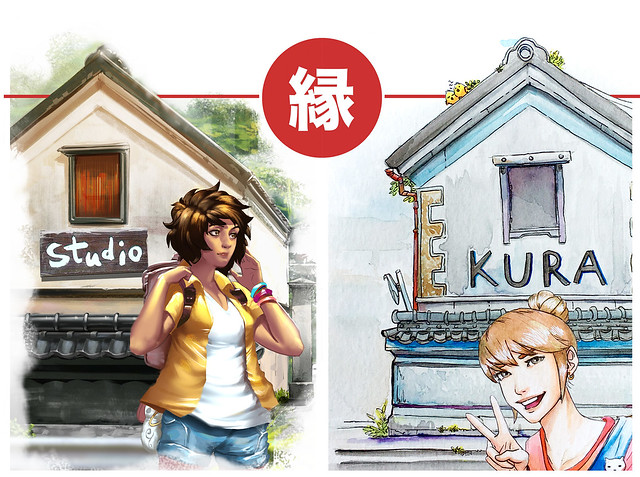 We are pleased to announce an exhibition Fate by Brandon Fernandes & Naomi Soh on May 27 (Sat) & 28(Sun), as a result of their collaborative activity during thier stay at Studio Kura.

Brandon Fernandes is an new media artist hailing from the city of Dubai, United Arab Emirates. He is a graduate from 3dsense Media School in Singapore and is attending the ‘artist in residency’ program at Studio Kura for the second time.
Having a range of skill sets, his main focus is visual story building with characters and environments, making them either whimsical or a bit surreal keeping a connection with reality. Character development is another one of his important focus as he likes to portray the human connection with the surround environment in the painting as well as the connection with the viewer.

Naomi Soh is an artist hailing from the sunny island of Singapore. She is a graduate of 3dsense Media School in Singapore, and is here in Studio Kura, for the second time.
Also known by her art handle “Naoxy” she loves to paint pieces with people as her main focus, because she believes that every person has a story, and every story is worth telling. She also focuses on trying to create positive emotions with every piece she works on.
Though she works mainly in digital, Naomi also loves to experiment with traditional mediums like graphite, ink, copic markers and watercolours.

Here are some words from the artists themselves.

“Fate” is about two different people from different places, coming together by chance. It’s an exploration into how everyone is connected; though each on their own journey, their paths eventually cross.