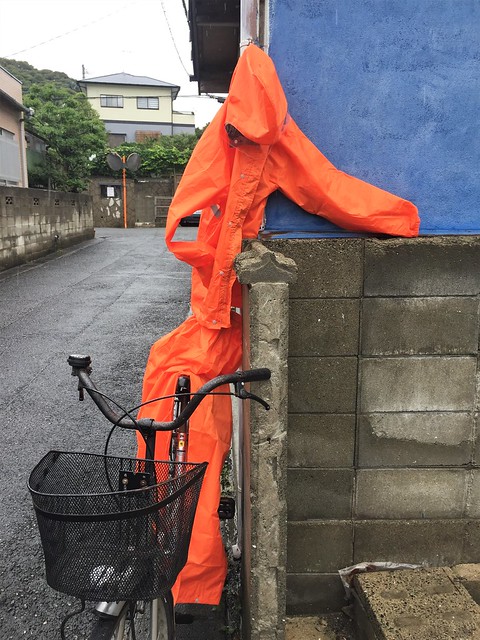 We are pleased to announce music performances Music From an Orange Suit by Nathan Phillips on July 25(Thu.) to 27(Sat.), as a result of his activity during his stay at Studio Kura.

Nathan Phillips is an Ohio native. His mother sang in operas and musicals, while her father, a 12-tone composer taught music in Cincinnati, before she moved to Mansfield, where Nathan grew up playing piano. In addition to his solo keyboard and vocal work, Nathan has supported bands like Julianna Barwick, Qasim Naqvi, and, as a member of Youngstown’s The Building, The War On Drugs.

Nathan Phillips will perform music on a bicycle, from an orange suit. The music was written while in motion, riding through Itoshima’s rice fields. Half of the music was randomly generated from a playlist, while listening through headphones, and the other half was created by singing along, with improvised melodies and lyrics. In preparation for Fukuoka’s rainy season, this music will be performed from an orange suit, rain or shine.

Nathan Phillips “Music From an Orange Suit”
Live Music performance
Date: July 25 (Thursday) 16:30-, 27 (Saturday)16;00-.
* After his performance on 25th, there is another live sound performance by Pedro Brito with drawings by Ema Gaspar as a collective show “Recordings” in a Japanese room in House 1, next to Studio 1.
* We will hold an artist talk on 27th (Sat.), starting at 16:00.
* The exhibitions by other eight current residence artists will be held at the same exhibition periods.