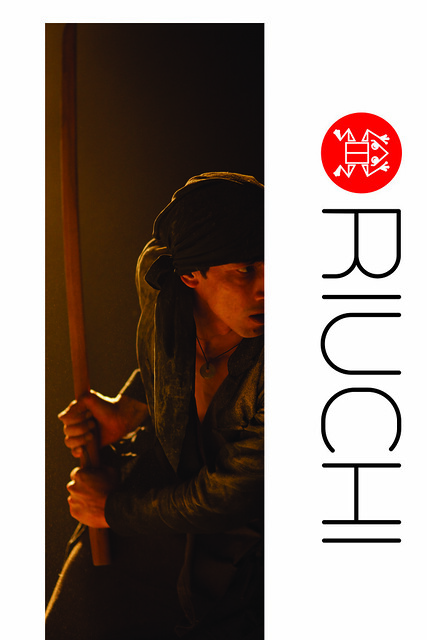 We are happy to announce Sword combined with magic technique. by Guillaume Cousson, as a result of his activity during his stay at Studio Kura.
>> Please see here for his magic workshop for kids on Nov 27(Sun).

Guillaume Cousson is a performer who is characterized by the diversity of his bodily expression – a fusion of circus,dance, magic and visual art to create performances. Guillaume has a passion for Asian art and Japanese manga and when he was a kid he studied drawing. Later he self-trained as a hip hop and contemporary dancer, and he discovered circus through juggling in 2003. From this combination of skills he focused his training on the body movement integrating visual pattern created by the object in motion. He collaborated with manufacturers and created a concept for a show using advanced technology to create live visual effects combined with magic technique. In 2011 he created the character RIUCHI who is Guillaume’s Asian side.

Rooted in traditional Japanese rituals, arts and techniques. Guillaume explores various possibilities through the mix of martial arts, magic techniques, technology and special effects, all created live on stage. Guillaume visualized emotional journeys that defies logic, gravity and expectations. He creates concepts using traditional and contemporary movement and magic that blend seamlessly with the visuals brought to the stage, adding an unexpected sense of wonder.
From this combination emerged emotional landscape in an imaginary world nourished by old traditional tale and science fiction.

Guillaume Cousson “Sword combined with magic technique.”
Date: November 26 (Saturday), 17:00-, free entrance
* We will hold an artist talk and opening party on Saturday the 26th, starting at 15:00.
* The exhibition by other two artists (Joanna Vymeris and Silas Thomas Parry) will be held during the weekend.