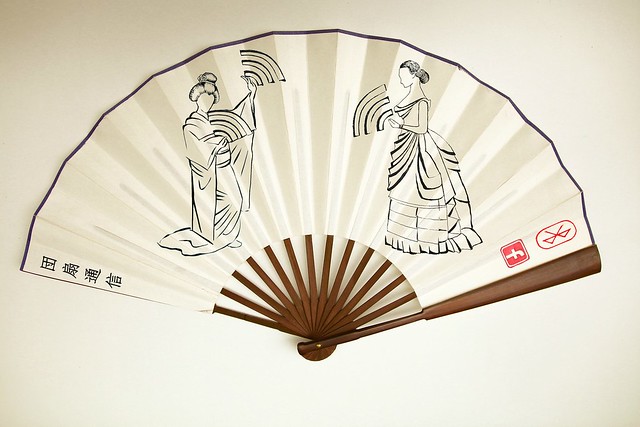 We are pleased to announce an exhibition Fanology by Hugh Davies on June 24 (Sat) and 25 (Sun), as a result of his activity during his stay at Studio Kura.

Hugh Davies is interdisciplinary artist based in Melbourne, Australia.
With a BFA in Sculpture from Melbourne’s Victorian College of the Arts and an Advanced Diploma in Multimedia Design from Copenhagen Technical Academy, Hugh completed his PhD investigating Internet architecture and Transmedia games at Monash University in 2014.
He is interested in histories of technologies and those who adapt and subvert them.

The Japanese fan represents an important object in the prehistory of handheld devices. Imported into Europe in the 17th Century, they were used almost entirely by women, who were regarded within polite society as ‘better seen than heard’. These silenced women developed a secret language of fan signals that came to known as “The Ladies Telegraph”. This series of works on fans investigates and layers the languages, imagery and histories of the hand fan and more recent telegraphic devices. 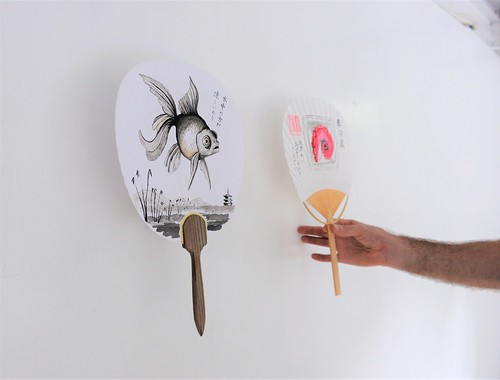 Hugh Davies “Fanology”
Date: June 24 (Saturday) and 25 (Sunday), 11:00 to 18:00, free entrance
* We will hold an exhibition party and an artist talk on Saturday the 24th, starting at 15:00.
* The exhibitions by other current residence artists, will be also held on the same dates.